What does the color temperature of the lamp mean?

Color temperature is a temperature measurement method, usually used in the field of physics and astronomy. This concept is based on a fictional black object that emits light of different colors when heated to different temperatures, and its objects appear in different colors. Just like heating an iron block, the iron block first turns red, then yellow, and finally turns white.

Understanding the relationship between light and color temperature helps photographers shoot in different light, pre-calculate what color tones will be taken, and further consider whether to strengthen or reduce this color tone, in actual Which camera function should be used to enhance or weaken this tone when shooting. How much is the color temperature of the led lamp?

The most suitable color temperature range of LED lighting fixtures should be the color temperature range close to the natural white light of the sun. The most scientific choice is the natural white light of lower irradiation intensity, which can achieve the unmatched illumination effect of other unnatural white light; the most economical road surface The brightness range should be within 2cd/m2; improving the overall uniformity of lighting and eliminating glare are the most effective ways to save energy and reduce consumption.

1. The human brain's recognition and response mechanism to things

The first reaction of the human brain to obtain images of external things through the eyes is to compare the acquired images with the image information originally stored in the memory of the brain, and then immediately make corresponding response actions. If the acquired image information is closer to the original stored information, the faster the recognition speed and the quicker the response. If the driver is under a low color temperature light that is farther away from the daytime natural light at night, the more difficult it is to recognize the acquired image, the slower the recognition speed and the slower the response speed. The result of slowing down the response speed by 0.1 second is enough to make the accident rate increase suddenly. To compensate for the shortcomings caused by the difference in day and night color temperature lighting, the only way is to increase the lighting intensity to increase the recognition speed at low color temperature, which means increased energy consumption.

So why do Europeans like low color temperature? This is due to its ethnic and geographical reasons. Europeans are white-skinned, and white light makes people with white skin look pale. There is even an exaggeration to say that it is like the colors of dead people, so it is natural that they prefer warm colors. But we are yellow races, and the hue of the natural white light of the sun does not make us look pale. In addition, most of Europe is located in high latitudes and low temperatures, which is the geographical reason for their preference for warm colors. However, we are in a temperate zone with four distinct seasons, and there is no long cold winter. It is a little unnecessary to follow the Europeans to choose too warm colors.

3. Appropriate applications for the penetration ability of yellow light rain and fog

There is also a saying that yellow light with low color temperature has a better ability to penetrate rain and mist, so it should be selected. We do not deny the fact that yellow light penetrates rain and fog better than white light. However, we should understand that a large number of street lamps work under the conditions that sunny days occupy most of the time, and rain and fog weather account for a relatively small proportion after all. Choosing a warm color temperature lamp that adapts to rain and fog, isn't it the arrogance, the upside down? In certain occasions, such as foggy port occasions, it is a reasonable choice to choose low-color temperature lighting fixtures. Ordinary road lighting should choose the color temperature range close to the natural white light of the sun, which is both scientific and energy-saving.

Above, we have only explained the reason why the color temperature of illumination should be selected close to natural white light only from the recognition and response mechanism of the human brain. Below, we will further analyze this argument from the perspective of the color rendering index.

The reason why the human eye can see an object is because the light emitted or reflected from the object enters our eyes and is perceived. The basic mechanism of lighting is to irradiate light onto an object, absorb and reflect through the object, and then reflect from the outer surface of the object into the human eye, so that people can perceive the color and appearance of the object. However, if this illuminating light is only a certain color light, then all we can see is the object with that color. It goes without saying that if the beam of light is complete with continuous light

Sunlight illuminates the earth from morning to night. Not every sunlight we feel is necessarily natural white light. Because it is also interfered by the absorption, refraction, and reflection of clouds of different thicknesses, the composition and proportion of the various spectral lines that make up natural white light will change. Sooner or later, the sunlight will be seriously affected by heavy clouds, the angle of illumination, and refraction. Therefore, the color rendering index of the golden sunlight during this period has been far from 100, and it is not even a natural white light.

Due to the LED packaging technology, LEDs mixed with red and yellow pigments have a faster light decay than white LEDs, that is, their luminous intensity must fall faster than white LEDs. The price to compensate for this loss of light intensity is to increase the number of LEDs assembled in the lamp, which means an increase in cost and energy, which is also a very helpless result.

6. The cost of light intensity of low color temperature LED

Due to the LED packaging technology, LEDs mixed with red and yellow pigments have a faster light decay than white LEDs, that is, their luminous intensity must fall faster than white LEDs. The price to compensate for this loss of light intensity is to increase the number of LEDs assembled in the lamp, which means an increase in cost and energy, which is also a very helpless result. 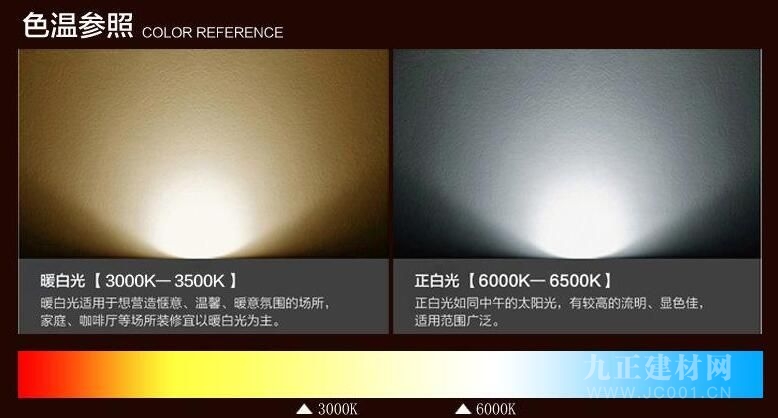 7. The inevitability of changing the lighting standards

The ultimate purpose of lighting is to allow people to obtain the observation clarity of real images of motion and still life. Nowadays, the emergence of LED lamps with a color rendering index of 70-90 and close to the natural white light of the sun is a good opportunity for us to improve the quality of lighting and reduce energy consumption.

The color rendering index of high-pressure sodium lamps is only 20-30. In the era when it dominated the street light system, in order to achieve the recognition and clarity of observing objects under its lights, it was only possible to work hard to achieve the goal by increasing the illuminance value. The Ministry of Construction's "Urban Road Lighting Design Standards" is based on the background of low color rendering index sodium lamps as the dominant lighting source. These standards were originally understandable. However, under the condition of using high color rendering index LED as the light source, this standard is too high. Because, under the LED light source with high color rendering index, to obtain the clarity of the identification and observation of the real image of the object, it only needs to be far less than the standard of the illumination requirement of the high-pressure sodium lamp. According to our many years of practical experience, as long as the illuminance intensity is less than 30% of the "Urban Road Lighting Design Standard" of the Ministry of Construction, it can achieve the same lighting effect as the high-pressure sodium lamp with even better identification and clarity.

Using the same illuminance standard as the high-pressure sodium lamp to regulate the LED light source means unnecessary waste of energy. Excessively high-intensity LED lighting will even attract complaints that the LED lights are too "glaring"; reducing the intensity of the illumination will not only save energy, but also obtain a "soft" lighting environment.

For the two high-pressure sodium lamps and LED lamps that have a color rendering index difference of 2-3 times, the modification of the illumination standard is definitely an inevitable outcome. In the case where our country has not yet revised the road lighting standard, only the experts who have implemented it are invited to pay attention to this problem. On the premise of not offending the existing national lighting standards, it is recommended to adopt the low-level value of this standard is wise.

Therefore, the color temperature range of LED lighting fixtures and the selection of lighting standards are closely related to lighting quality and energy saving and consumption reduction. Choosing LED lighting fixtures close to the natural white light color temperature of the sun and appropriate lighting standards is the wise and scientific choice that complies with the principle of energy saving.